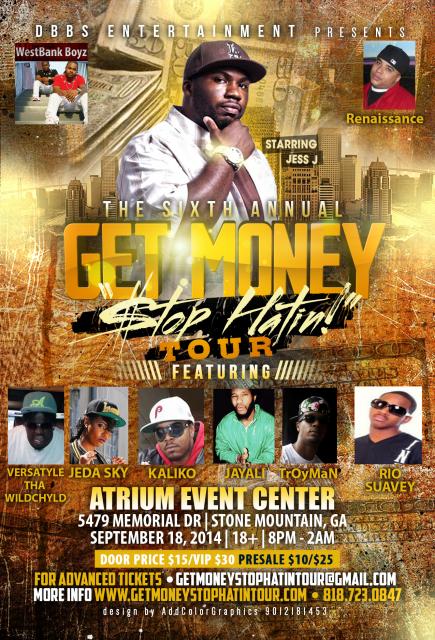 This year is making history again as the premiere platform for showcasing independent artists in the United States. Since the official launch in 2009, this tour has produced over 300 concerts in 80+ cities with over 125,000 concert attendees.

The G.M.S.H. Tour was designed provide opportunities for independent artists to be consistently seen and heard in cities all over the United States that would not normally be accessible to them. Whether it’s Atlanta, Miami, Chicago, New York, Las Vegas, etc, any artist can participate.

Ten percent of all merchandise sales and ten percent of all proceeds from each tour date will be donated directly to people in need through the G.M.S.H. Tour G.U.A.R.D. program. Go to www.getmoneystophatintour.com and click on the G.U.A.R.D. tab for more information.

ABOUT DBBS ENTERTAINMENT
The 6th annual 'Get Money Stop Hatin' tour is produced by DBBS Entertainment. DBBS Entertainment is a record label & management company that specializes in music distribution, artist development, artist management, event planning and promotions. Since 2005, we've produced over 500 concerts in the United States with a multitude of artists ranging from superstars such as Lil Wayne and Young Jeezy to notable names in Hip Hop like Paul Wall and Shawnna.