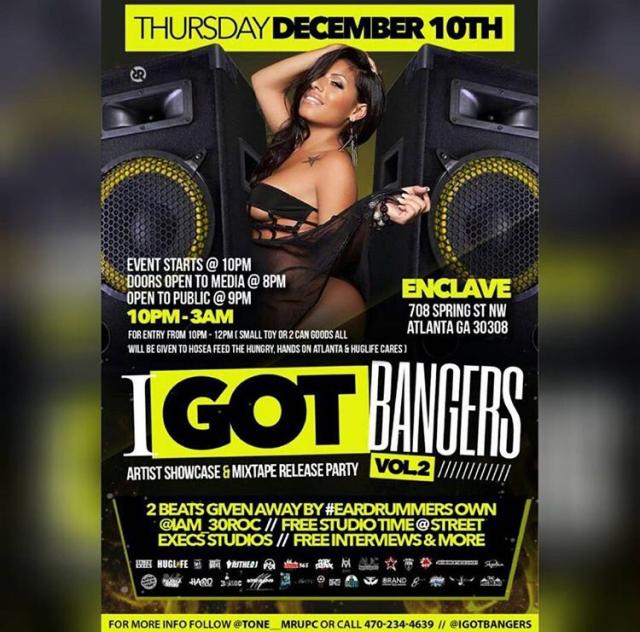 The DurttyBoyz own, Tone,Mr.UPC is taking over the city of Atlanta with his indie artist showcase and industry mixer iGot Bangers.

Atlanta, GA- With the Holiday season scandals and indie artists showcase scams galore in Atlanta many rising artists are saying beware of the shenanigans but iGot Bangers is an indie artist showcase and mixer for the Atlanta market to be aware of. Thursday, December 10, 2015 Tone, Mr.UPC is taking over the Atlanta streets with his showcase iGotBangers.

The event will take place Thursday, December 10th, 2015 at Enclave Nightclub (708 Spring St. NW, Atlanta, GA 30308) 10pm - 3am. The showcase is geared to highlight artists in the Atlanta circuit who are motivated and investing into their career. He developed this idea when he was incarcerated in Cobb County Jail this time last year. Tone had a vision and now it is all becoming reality. Being a strong community advocate and invested in helping the underdogs of this industry the structure of this event has created a supreme essence of which Atlanta has yet to see. The showcase will consist of numerous artists from all sectors of Atlanta and even a few outskirts.

The showcase will also involve a few special guest artists and celebrity judges from all three main urban-circuited stations in Atlanta. The surprise guest judges include: Ferrari Simmons (V-103), The DurttyBoyz ET Cali and J Nicks (Hot 107.9) and Shorty Mack and Fly Guy DC (Streetz94.5). The mixtape iGotBangers will also release the night of the showcase. The mixtape is hosted by DurttyBoyz DJ Tonee and Dj RayG. We are pleased to announce our official liquor sponsor Happy Juice, product sponsors, which include free beats given away from 30 Roc (Ear Drummers), apparel from Local Trap Star, Dope Dreams, Founding Fathers and media sponsors galore from K100, Urban365, Highly Unique Radio, WSTU Radio, A&R’s and more. We invite you to join the fun and festivities.

PSA: WE ARE GIVING BACK TO THE CITY OF ATLANTA BY DONATING CANNED GOODS AND NON –PERISHABLE ITEMS, GENTLY WORE CLOTHES AND TOYS FOR TOTS. ALL PROCEEDS WILL BE DONATED TO HUGHLIFE CARES, HOSEA FEEDS THE HUNGRY AND HANDS ON ATLANTA. DONATING ITEMS CAN SERVE AS ENTRY FROM 10PM UNTIL 12AM BUT ITEMS ARE ACCEPTED ALL NIGHT LONG. THANK YOU!