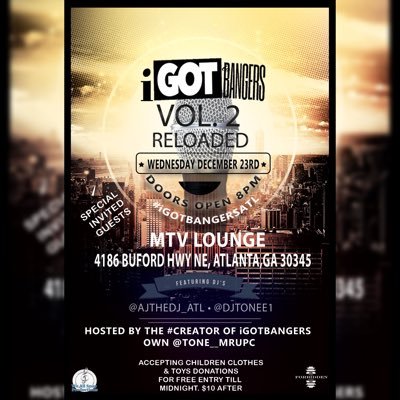 INDIE ARTIST SHOWCASE & INDUSTRY MIXER iGOT BANGERS Vol.2 Reloaded
Tone,Mr.UPC is taking over the city of Atlanta once again with his indie artist showcase and industry mixer iGot Bangers but this time they are RELOADED.

Atlanta, GA- With the Holiday season scandals and indie artists showcase scams galore in Atlanta many rising artists are saying beware of the shenanigans but iGot Bangers is an indie artist showcase and mixer for the Atlanta market to be aware of. Wednesday, December 23, 2015 Tone, Mr.UPC is taking over the Atlanta streets with his showcase iGotBangers.

The event will take place Wednesday, December 23rd, 2015 at MTV Lounge (4186 Buford Hwy NE, Atlanta, GA 30345) 10pm - 3am. The showcase is geared to highlight artists in the Atlanta circuit who are motivated and investing into their career. He developed this idea when he was incarcerated in Cobb County Jail this time last year. The success of iGot Bangers earlier this month sparked the idea of generating a reloaded addition to attract more indie artists. Tone had a vision and with his team the vision has become reality. Being a strong community advocate and invested in helping the underdogs of this industry the structure of this event has created a supreme essence of which Atlanta has yet to see. The showcase will consist of numerous artists from all sectors of Atlanta and even a few outskirts.

THIS EVENT WILL SERVE AS A GIVE BACK TO FAMILIES OF THE CITY OF ATLANTA WHO HAVE FALLEN ON HARD TIMES. PLEASE BRING DONATIONS, THESE ITEMS CAN SERVE AS ENTRY FROM 10PM UNTIL 12AM BUT ITEMS ARE ACCEPTED ALL NIGHT LONG. THANK YOU!