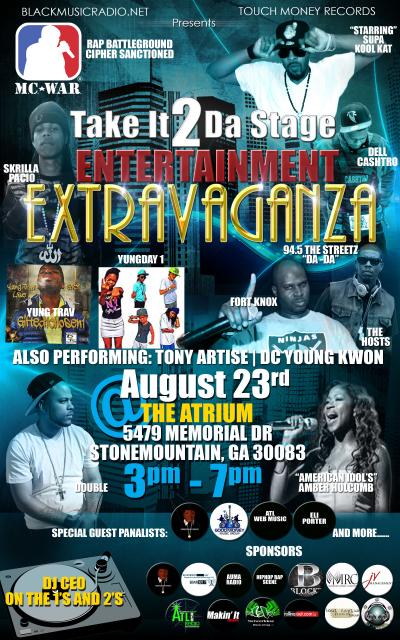 This weekend in Stone Mountain, Georgia the energy will be at an all time high! Take It 2 Da Stage presents "The Entertainment Extravaganza". Come out and enjoy the show! It's a talent competition, rap battle, showcase and networking event hosted by Fort Knox and 94.5 The Streets "DaDa" at The Atrium Event Center, 5479 Memorial Dr. Stone Mountain, GA 30083 This Sat. Aug 23 2014 from 3 pm - 7 pm. The winners will receive prizes such as a recording session at Soul Asylum Studios, a production deal with Producer James Worthy, magazine article in Blockz Magazine and Good Money Magazine, along with other prizes sponsored by BlackMusicRadio.net, Good Money Music Group and HipHopRapScene.com. This experience will be a great opportunity for artists to acclaim phenomenal media exposure in front of a large live audience and industry professionals D.C, Atlanta, Los Angeles, Dallas and more. A panelist of industry judges and the crowd will help decide who will garner the bragging rights of this event’s competition, plus special guest appearances and performances by Eli Porter, The Royal Family, Touch Money Records, Hustle Gang, James Worthy, American Idol's Amber Holcomb, Yung Day One, Yung Trav, Double, Dell Cashtro, AUMA Radio, AtlWebRadio, Supa Kool Kat and more. Plus don't miss the special Rap Battle cipher sanctioned by MC War...only the best and serious freestyle MC’s and Rappers that are passionate about their craft, mechanics, delivery, style, flow, and vocabulary will TAKE IT 2 DA STAGE! Pound for pound! Bar to Bar! They will compete to see who is worthy to compete in MC War's BIG event "Keith Murray VS Fredro Starr and win cash prizes!! Judging- Judging will be determined by our industry panel of judges and on the crowd’s reaction. There is no appeal process or protesting allowed.